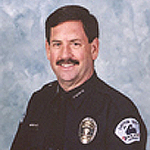 Chief Keefe is a graduate of session 50 of the Utah Police Academy (and was class valedictorian), a graduate of the FBI National Academy, the DEA Narcotics Unit, Commander Academy, and a graduate of Weber State College with a Bachelor of Science Degree. He has twice served as President of the Utah Chiefs of Police Association. Governor Herbert appointed Chief Keefe to the P.O.S.T Council, the State Interoperability Executive Committee, and the State Information Analysis Center where he currently serves as an executive board member.

He and his wife, Jann, reside in Layton and have four children and four grandchildren.