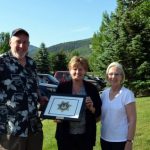 Mr. Taylor is a former financial services executive who lives in Park City, Utah. He is a private investor and a member of the board of directors of Target Bank, Inc.(since 2005). Mr. Taylor was a director of Conseco Bank from 1999 to 2003.

Since leaving his last executive financial services position in 1997, Mr. Taylor has adopted a second career engaging in outdoor adventure. He is an avid motorcyclist and has, in addition to touring through much of the Western United States by motorcycle, completed adventure motorcycle tours in southern Europe, Corsica, Sardinia, Sicily, Morocco, Vietnam, Japan, Ecuador, Peru, Mongolia, Turkey, Ethiopia, Mexico, Canada, Alaska, Southern Africa, Bhutan, India, Chile, Argentina and Cuba. He is a downhill skier and annually skis over one and a half million vertical feet.

Mr. Taylor was professionally active in financial services from 1971 to 1997. During 1997 he directed clean up efforts for a privately held, distressed insurance premium finance company, NIPF Company, in Mesa, Arizona.

From 1991 to 1995 he led the turn-around effort of Miami’s $3.5 billion deposit, publicly traded (Nasdaq) American Savings of Florida, and the sale of the same to Wells Fargo Bank (then First Union Corporation).

From 1988 to 1991 Mr. Taylor served as a member of Citicorp’s Credit Policy Committee. In this position, based in New York City, he performed as the senior credit officer for Citicorp’s US Consumer Banking Group.

From 1979 to 1988 he headed (as CEO) Citicorp consumer finance and banking businesses based in Miami, Florida; Washington, D.C.; Tokyo, Japan; and Manila,Philippines.

From 1972 to 1979, he served in executive roles in Citigroup businesses in Australia and India. For six months during 1971 he was assigned to Citibank’s ExecutiveTraining Center in Beirut, Lebanon for banking operations training.

From 1986 to 1988 and from 1991 to 1995, Mr. Taylor was active in Miami civic affairs, including the Leukemia Society of America (directorship, gala organizer), Florida Grand Opera, United Way (directorships), Florida International University and the University of Miami (citizens boards). Mr. Taylor served as a member of the Board of Trustees of Bethune Cookman College, in Daytona Beach Florida, in 1987 and 1988.

He attended the American University of Cairo, in Cairo, Egypt (1964) and is a graduate of Brigham Young University (BA 1969). He received a Master of Business Administration (MBA) degree from the Harvard Business School (1971).

In addition to motorcycling and skiing, Mr. Taylor enjoys, reading, writing and music. He writes about his motorcycle adventures. He is a trombonist and plays keyboard and drums.