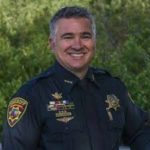 As a Utah native living in Summit County, Justin started his law enforcement career in 1996. He joined the Summit County Sheriff’s Office in 2005 and was elected Sheriff in 2014. As Sheriff, he commands a staff of over 150 sworn and civilian employees and oversees every division which includes Patrol, Investigations, Major Crimes, Corrections, Courts and Civil, Communications, Search and Rescue, Administration, as well as all statutory requirements.

Over the span of his law enforcement career, Justin has successfully held supervisory positions as a Captain, Division Commander, Patrol Sergeant, SWAT Team Leader, Honor Guard Commander, and Training Coordinator. Justin has also served as a motorcycle officer, bike patrol officer, traffic officer, and detective.  In 2003, Justin was handpicked from hundreds of applicants to establish the new Draper City Police Department. During this inaugural year, he was awarded the Officer of the Year. Justin has also been awarded three lifesaving medals throughout his career.

Prior to his law enforcement career, Justin served two military tours of duty in the United States Coast Guard. He successfully completed air crewman flight candidate school and served as a helicopter air crewman. Justin was awarded numerous medals and citations before being honorably discharged.

Justin earned a Master of Business Administration from the University of Utah and a Bachelor of Science in Emergency Service Management Administration from Utah Valley University. He is married, has two adult daughters, and three dogs. His interests include fly-fishing, mountain biking, camping, and skiing.